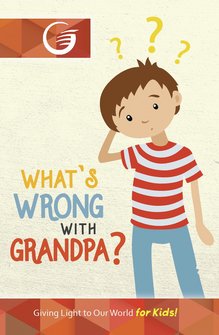 “Well,” Dad chose his words carefully, “Grandpa is sleeping, and he won’t wake up for a very long time.”

While family and friends gathered at the graveside, Grandpa’s casket was lowered into the ground. As family members shoveled dirt into the grave, Daniel grabbed his father’s arm. “Tell them to stop, Daddy!” he said urgently. “Grandpa’s going to get dirty, and when he wakes up he’s going to have to take a bath!”
Like young Daniel, many people are confused about what happens when someone dies. Some people believe that when people die they go straight to heaven, while others believe that there is nothing at all beyond death. Not knowing what to believe, many people are afraid of death and don’t have hope.
Death affects everyone, and it’s very important that we understand what really happens when a person dies. Clear answers to questions about death can be found in the Bible.

When a Friend of Jesus Died
There are several stories in the Bible about people who died. One such story is about a man who lived in the town of Bethany with his two sisters, Mary and Martha. His name was Lazarus, and he was a close friend of Jesus. While visiting another town, Jesus heard that Lazarus was very sick. Jesus told His disciples that Lazarus had fallen asleep, and He was going to Bethany to wake him. The disciples thought it was very good news. If Lazarus was sleeping, he must be recovering from his illness. But Jesus said to them, “Lazarus is dead” (see John 11:4-5; 11-14). Lazarus had been dead for four days when Jesus and His friends arrived in Bethany. Mary and Martha took Jesus to the place where Lazarus had been buried. Jesus asked that the stone in front of the tomb be rolled away.  The people wondered what Jesus was going to do next. They were surprised to hear Jesus call out loudly, “Lazarus, come out!” (John 11:43). They watched in amazement as Lazarus shuffled out of the tomb toward Jesus, still wearing his burial clothes. Jesus had brought Lazarus back to life!

According to Jesus, Lazarus was asleep, although he wasn’t dreaming as you might dream at night. The Bible tells us that when people die, their thoughts die (Psalm 146:4), and they “know nothing” (Ecclesiastes 9:5). Psalm 115:17 says, “The dead do not praise the Lord” (NKJV) and describes death as “silence.”

When It’s Time To Wake Up
People who die sleep in their graves waiting for the day when Jesus returns to wake them. “For the Lord himself will come down from heaven, with a loud command, with the voice of the archangel and with the trumpet call of God, and the dead in Christ will rise first” (1 Thessalonians 4:16).

What a wonderful thought! Our family members and friends who have died are peacefully resting in a dreamless sleep! There is nothing frightening or scary about this sleep, because dead people don’t know what is happening. The next thing they will know after death will be Jesus calling their names, and the happiness of knowing they will be with Him forever.

Some people think that everyone has a soul that continues to live on after death. When God created Adam, He made him from the dust of the ground, and then breathed into him the breath of life. The Bible says that Adam “became a living soul” (Genesis 2:7, KJV). Rather than being given a soul that lives forever, Adam was a soul just like us. When Adam died, his soul didn’t live on. He simply fell into a sleep so deep that no alarm clock could possibly wake him up (see Psalm 104:29).

Jesus said to Martha, “I am the resurrection and the life” (John 11:25). Rather than death being the end of everything, it is the promise of a new beginning that takes place when Jesus returns.

Paul wrote to the Christian believers in Corinth, “Listen, I tell you a mystery: We will not all sleep, but we will all be changed—in a flash, in the twinkling of an eye, at the last trumpet. For the trumpet will sound, the dead will be raised imperishable, and we will be changed” (1 Corinthians 15:51-52).

Death is a sad thing. When God created the earth He intended that people would live forever without dying. Death exists because sin is in the world. God feels the sadness we feel when we lose a close friend or family member. But one day Jesus—“the resurrection and the life”—will return and raise from the dead all who have loved and lived for Him.