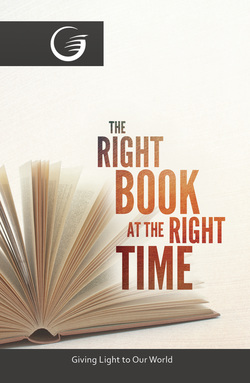 When she placed the book in my hand, I reluctantly accepted it. I did not intend to read it, but to be polite, I even thanked her. I didn’t tell her, of course, that I already planned to throw it away once I got home. She smiled, encouraged me again to read the book, and that was that. I placed the book in my backpack, making sure she saw me do it, and rode away on my bike.

That experience occurred 20 years ago, and I’m thankful that book never found its way into the trashcan, but, somehow, ended up on my bookshelf–the bottom shelf. It sat there for more than a year, neglected and forgotten.

Life has a way of springing surprises on us, doesn’t it? The status quo can be suddenly and unexpectedly overturned. A car accident. A financial crisis. A loved one’s death. A doctor’s visit. A broken heart. It can be anything. One moment, all is seemingly well and fine, and the next moment, everything changes.

I should know–it happened to me. And, like you, I’ve seen it happen to many others. When the furniture of life is rearranged without notice, and the normal routines are rerouted into unfamiliar territory, things can get scary quickly. For me, it was a broken heart. I’ll spare you the details. But if you’ve been there, really been there, you know that the quaint phrase “a broken heart” doesn’t even begin to describe the depths and darkness of what’s happening. Feelings of doubt, insecurity, and rejection, among others, swirl and strengthen where, before, confidence, purpose, and happiness had been.

For me, a generally upbeat and easy going person, a broken heart was entirely paralyzing. I just shut down emotionally and socially. Depression, a word I’d heard but never known, now knocked at my own door. I’d look in the mirror and, scarcely recognizing the face looking back at me, wonder if life really was worth living. After all, if things can go so bad so quickly and so unexpectedly, how could I ever feel safe again?

One day I found myself staring listlessly at, of all things, my bookshelf. My eyes wandered over the titles. And then I saw it, the book–-that bottom-shelf book. Something seemed to be saying, take it off the shelf. I instinctively resisted, knowing what kind of a book it was but the sense persisted, and, almost without believing myself, I grabbed it.

I knew what this book would be about, or did I?

As it turns out, I didn’t. Not at all. To say that this book turned my world upside down (or, more accurately, right side up) would be a grand understatement. I considered myself a reasonably informed and perceptive person, but this book took me by surprise. I couldn’t stop reading it. Could so much of what I’d believed up to this point really be that wrong? The short answer, and the honest answer–yes.

So what was it? What was in that book? Why had I been so reluctant to read it in the first place? Well, it was a religious book. Hey, I know what many of you are thinking. It’s probably about the same thoughts I had when the book was first placed in my hand. Nope. Not interested. Thank you, but no thank you. Like so many, I’d been conditioned by all the bad religion in the world–religions of politics, violence, dishonesty, and ignorance. I wanted no part of it. Who could blame me? Or you?

As I read it, the world started looking bigger and more consequential than I’d formerly thought it to be. My life, too, took on larger meaning and purpose. Heartbreak began to fade, and hope dawned fresh and new, casting a promising light on everything around me. Wow, what if God really was as good as this book said–or claimed? Well, it would change everything, including me.

The trick, though, was being willing to hear about this “whole” God and religion thing through new ears. Why? Simply because so many things I’d been led to believe up to that point were so entirely and terribly incorrect. I learned, for example, that:


The book contains all that and more. It changed everything for me. Not a day goes by that I’m not thankful that that book never made it to the trash. Somehow it found its way onto my shelf until just the right time. Who knows, maybe this is just the right time for you. Belief in and love for God, unlike handcuffs, are not something that can be forced onto someone else. The time has to be right, and the mind and heart have to be unlocked and opened. But those doors can be unlocked only from the inside. It’s a personal, individual choice. God wouldn’t have it any other way.

I later found the woman who had handed me the book a year before. The moment she saw me, before I even opened my mouth, she somehow knew I had read the book. I smiled, hugged her, and thanked her. She just smiled back. I saw a knowing tear run down her cheek. She told me she too had been given the book. Her life, like my own, had been incalculably and positively changed. She had just passed it on.

And now I’m doing the same. Oh, I almost forgot to tell you the name of the book! Its called “The Great Controversy.” Is the time right for you? I hope and pray that it is.