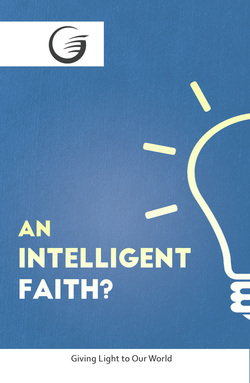 Joel and Mark were two friends with very different beliefs. Joel believed in God as the all–Sovereign King that created everything in the world. Mark was a devout atheist who scoffed at religion and thought the whole world – including himself – came about by accident, a biological mischance. “How do you know that God exists and the Bible isn’t just a book of fairy tales?” Mark often challenged. “God exists because the Bible says so and you can trust the Bible because it’s God’s Word,” Joel would reply. Mark would then chuckle at this illogic and say, ”That’s like saying, ‘I am a good worker because Frank says so. How can we trust Frank? Simple: I will vouch for him.’” The circular logic exhibited by Joel is faulty and will not convince anyone of the existence of God or that the Bible is true. Yet many today have no better reasoning for their belief in the Bible. Is there hard evidence in favor of the Bible’s validity? Do intelligence and reasoning go out the window when people become Christians?

THE DREAM
One way to test the validity of the Bible is to look at its prophecies. One of God’s claims is that He, through the Bible, can tell the future (Isaiah 46:9, 10, NKJV). Examining the historical records of ancient Babylon in the book of Daniel will help answer the question of the Bible’s validity. Here we find a king named Nebuchadnezzar, a ruler written about not only in the Bible, but also in other historical records.1 One night he had a troubling dream. When he awoke, however, he could not remember the dream – only that it haunted him. He summoned his wise men and commanded them to tell him his dream and its interpretation. His wise men were baffled at this request. They said, “There is not a man on earth who can tell the king’s matter…” (Daniel 2:10-11). The king was infuriated and commanded that all the wise men in Babylon be killed (Daniel 2:12). This is where a Hebrew man named Daniel comes on the scene. Daniel had been taken as a captive to Babylon when he was only a teenager. Daniel was a believer in God. When the king’s court official, Arioch, told Daniel about the decree, Daniel went to the king and requested time to tell him his dream and the interpretation. The king agreed. Daniel went home and earnestly sought God for wisdom. God answered his entreaties and, “the secret was revealed to Daniel in a night vision” (Daniel 2:19).

THE GREAT STATUE IN HISTORY
The next morning Daniel went into the king’s throne room and revealed to him the dream. The king had seen a large statue. It was composed of five different sections. The head was of gold, the chest and arms of silver, the belly and thighs of bronze, the legs of iron, and the feet partly of iron and partly of clay. Then, a great stone struck the image and smashed it to pieces so it became like chaff, which the wind carried away (Daniel 2:31-35). Daniel then told the king the dream’s meaning. The head of gold represented Babylon (Daniel 2:38). The silver signified Medo-Persia; the bronze symbolized Greece. The legs of iron represented Rome.2 The feet and toes of iron mixed with clay represented the divided power of Rome, partly weak and partly strong. Just as iron does not mix with clay, these nations would not adhere together. The great stone that smashed the image represented the kingdom of God. “And…the God of heaven will set up a kingdom which shall never be destroyed; it shall break in pieces and consume all these kingdoms, and it shall stand forever” (Daniel 2:38-44).

THE FULFILLMENT OF THE DREAM
Each of these predictions of the kingdoms represented by metal came true with unfailing accuracy. The first kingdom, Babylon, ruled the world from 605 to 539 B.C. The nation of the Medes and Persians governed from 539 to 331 B.C. The next empire, Greece, dominated from 331 to 168 B.C. The iron power of Rome ruled from 168 B.C. until A.D 476. The last kingdom, divided into many smaller kingdoms, represents the divided power of Rome, the modern nations of Europe, which still remain separate today. The Bible was correct in its identification of all five kingdoms and the time that they would arise!

MORE SPECIFIC EVIDENCE
Skeptics have suggested that Daniel’s predictions are false, his book being written at a much later time in history. Even if this were true, the fact that the Dead Sea Scrolls contain eight manuscripts from Daniel, the oldest dating to 125 BC3 (which itself is a copy of an earlier edition), shows that this prophecy was written hundreds of years before the dividing of Rome into the nations of modern Europe. This prophecy is just one example of hundreds which could be cited proving the Bible’s inspiration. Another concrete example is seen in the prophecy of Daniel chapter nine where the exact timing of Christ’s baptism and death were foretold hundreds of years in advance.4 Indeed, after an examination of valid evidence such as we have in the Biblical prophecies, we may conclude that God and the Bible can be trusted! Daniel chapter two shows us just how true and accurate just one of these predictions is, which gives us the grounds to hold an intelligent faith. The Bible is the inspired word of God and can be trusted as our guidebook in every circumstance.

However, merely believing this information will make it just that – information. Belief alone has no saving power over our lives. We must be changed by our belief. It is of eternal importance to not only believe the Bible, but to allow it to change us as well. The Bible says that “even the demons believe—and tremble!”(James 2:19). God will take our lives and transform them into something beautiful if we let Him. Will you?