Is  There  Hope  After  Death? 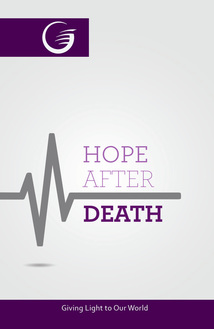 Michael Jackson’s untimely death on June 25, 2009 shocked the world. At his July 7 memorial service at the Staples Center in Los Angeles, actress Brooke Shields valiantly attempted to comfort the King of Pop’s grieving fans when she tearfully moaned, “we need to look up where he is undoubtedly perched in a crescent moon.”

Where did Michael Jackson really go? Where does anyone go after they die? Do saints instantly soar to heaven while lost sinners plunge into hell? Is there a “holding tank” called purgatory? Do we slip into the spirit world to float around on the Other Side? What about reincarnation? Might we return as mice?

Our world is full of conflicting theories, but we will consult only one source: The Holy Bible. The Bible’s last book, “The Revelation,” solemnly warns that an invisible fallen angel named Satan “deceives the whole world” (Revelation 12:9). If this is true, we can’t expect the majority of human beings to be right about anything, especially about something as important as what happens to a dead person after the preacher says, “Ashes to ashes, dust to dust,” at the end of a funeral service.

THREE PRIMARY VIEWS
Let’s begin by keeping things simple. First of all, there are three primary viewpoints about death under which most other theories fall.

You’re Dead and That’s It – The first is quite popular – though utterly dismal – and is being promoted by those who believe that all reality can ultimately be reduced to what science alone can explain. Based on their “what you see is what you get” dogma, they assume death is the end. Period. We die, rot in the ground, become food for worms, and that’s it. You’re a goner forever.

The Immortal Soul – This second view, which is the most common, teaches that when we die, only the body decomposes, while the Higher Self, or “soul,” journeys on, much like a snake shedding its skin. Of course different religions often disagree with each other about where souls go after death, but the basic idea of “soul survival” is shared by most.

Mortal Souls and the Resurrection – The final view argues that the word “soul” refers to the entire person, and not to some distinct immortal aspect that survives after the physical body perishes. When God created Adam, He “breathed into his nostrils the breath of life; and man became a living soul”(Genesis 2:7, KJV, emphasis added). Thus man doesn’t have a soul, per se, but rather he is a soul. After man sinned, his entire person, or soul, became mortal, or subject to death. When sinners die, they return to the dust, and “the breath of life” returns to God. This “breath” isn’t a conscious ghost that can visit Chicago after it’s host is buried in Detroit, but is rather a spark of life that exists in everything alive. According to this viewpoint, at death a person is completely dead, that is, they are unconscious, silent, asleep in the grave, waiting for Resurrection Day.

Which view is right? For starters, we reject atheistic nihilism because we believe that God exists and that His Word is true. There is a heaven, and a hell too. What about the other two views, with their opposing ideas on the nature of the soul? What does God’s Book really teach?

BIBLE FACTS ABOUT DEATH
As we’ve already seen, the Holy Bible teaches that when God first formed Adam, that “he became a living soul” (Genesis 2:7, KJV, emphasis added). Years later, “seventy souls” went to Egypt (see Exodus 1:5, KJV). The context shows that this wasn’t talking about seventy ghosts, but seventy living human beings who went to Egypt. Got it? A soul is a person.

Next fact: fallen human beings are not immortal. If you look up the word “immortality” in any Bible concordance, you will discover that it applies only to God now. God “alone has immortality” (1 Timothy 6:16), and it is only after His saints are resurrected at the Second Coming of Jesus Christ that “this mortal” will “put on immortality” (1 Corinthians 15:54). Obviously, His saints wouldn’t “put on” an immortal existence if they previously had one.

Next point: in the Bible, death is called “sleep.” In Old Testament times, King David prayed for protection lest he “sleep the sleep of death” (Psalm 13:3). At the end of the world, those who “sleep in the dust of the earth shall awake” (Daniel 12:2). Thus dead people lie peacefully sleeping “in the dust of the earth” until Resurrection Day.

Now here’s the kicker. In the meantime, the Bible is emphatic that “the dead know nothing” (Ecclesiastes 9:5). “Nothing” means nothing. Zero. Five verses later Solomon clarified that “There is no work or device or knowledge or wisdom in the grave where you are going” (Ecclesiastes 9:10). David dittoed when he wrote, “The dead do not praise the Lord, nor any who go down into silence” (Psalm 115:17, emphasis added). Thus the dead sleep silently. They are not shouting above or howling below. Neither can they knock on your door after their own funeral. In other words, Michael Jackson isn’t doing his famous moonwalk dance somewhere in the universe. Instead, he’s dead, in his grave, awaiting the Day of Judgment (Hebrews 9:27).

The epiphany of the entire Bible is what happened to Jesus Christ nearly two thousand years ago. During His holy ministry, our Lord plainly predicted that He would “be killed, and be raised the third day” (Matthew 16:21). So it happened. Shortly thereafter unholy hands arrested Him, beat Him, and crucified Him. Paul clarified that what really happened was that “Christ died for our sins” (1 Corinthians 15:3). “Christ died” means He was really dead. Three days later a holy angel announced, “He is risen from the dead” (Matthew 28:7). Halleluiah!

It is because of Jesus Christ’s resurrection that we have hope. One of these days – and it will arrive sooner than most people think – our Savior will return to earth “in power and great glory” with myriads of heavenly angels (see Matthew 24:30-31); and when He does, Paul clarified that it is at that time that “the dead in Christ will rise first” and that “we shall always be with the Lord” (1 Thessalonians 4:16-17). Thus believers in Jesus will be resurrected to “be with the Lord” when He returns.

THE BOTTOM LINE
The bottom line is: we all know that death is real, and it hurts. Yet in the midst of grief and loss, the Good News is that Jesus Christ loves us, paid the penalty for our sins, entered a clammy tomb, and was raised to life, thus conquering death and the grave. If we trust His victory, we can beat death too. Long ago Jesus promised those who respond to His love, repent of their sins, and trust in His grace, “I will raise him up at the last day” (John 6:44).

His promise is for you today.